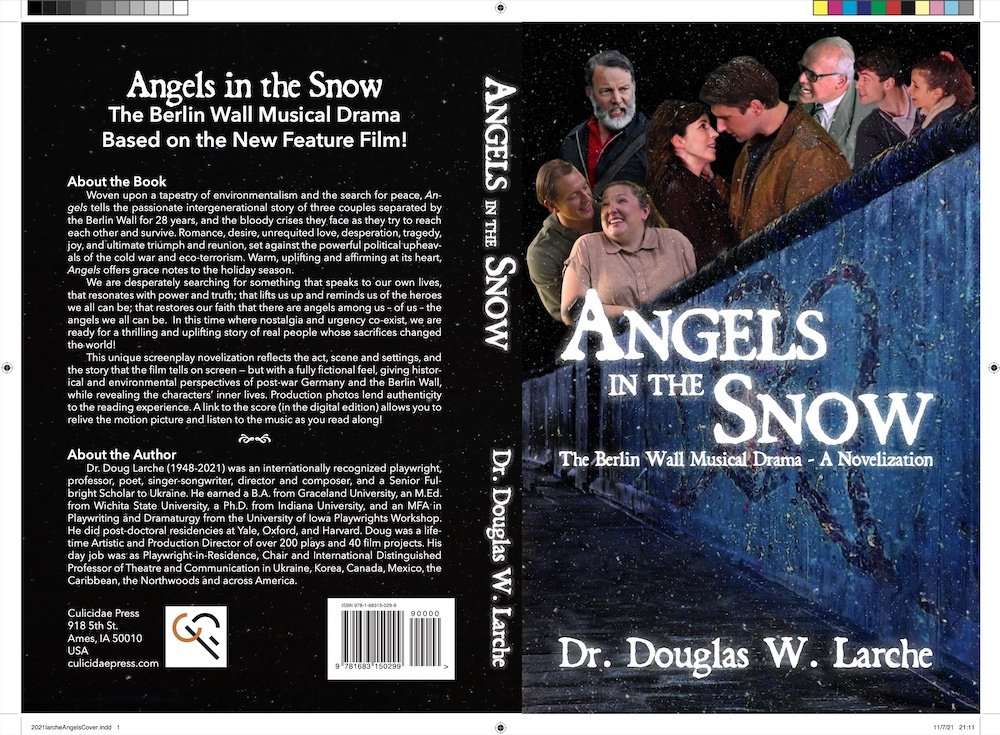 We just completed the design of the late Doug Larche’s book Angels in the Snow, a novelization of the Berlin Wall musical drama of the same name. We were contacted by Doug last February to take on the design of Angels in the Snow, and by the end of August 2021 the book was ready to be published. The interior had been completed, and Doug was waiting for our design of the cover, when he died unexpectedly. We completed the cover design with feedback from his daughter, and the book is now available through Culicidae Press. Below is Doug’s bio, courtesy of Culicidae Press:

Dr. Doug Larche was an internationally recognized playwright, professor, poet, singer-songwriter, director and composer, was a Senior Fulbright Scholar to Ukraine. He earned a B.A. from Graceland University, an M.Ed. from Wichita State University, a Ph.D. from Indiana University, and an MFA in Playwriting and Dramaturgy from the University of Iowa Playwrights Workshop, where he was a Norman Felton Fellow. He did post-doctoral residencies at Yale, Oxford, and Harvard. The founder of five international playwrights workshops, Doug was a lifetime Artistic and Production Director of over 200 plays and 40 film projects. His day job was as Playwright-in-Residence, Chair and International Distinguished Professor of Theatre and Communication in Ukraine, Korea, Canada, Mexico, the Caribbean, the Northwoods and across America.

Among his over fifty plays, Truth on Trial: The Ballad of Sojourner Truth won the 21st Century National Playwrights Festival of New York City; Number the Stars, based on the Newbery Award Gold Medal novel by Lois Lowry, has had almost 400 international productions, opening two Holocaust Museums; Angels in the Snow has been performed at the

Dag Hammarskjöld Theatre of the United Nations in New York and at international Perestroika and Theatre Festivals; S*M*A*S*H, an AIDS- Education musical, toured sixty cities for the National Centers for Disease Control, U.S. Department of Health; Young Comfort (Women) was named the Best Original Script at the Pohang, Korea Festival; his renowned Ukrainian Pentalogy includes the award-winning Taras and Me, Mail Order Anya, Virtuality and two new plays set against the current Russian War, including Ukrainian Nocturne. His musical, created posthumously with his son, Jason, is called Harmony.

Doug was the author of the international best-selling children’s book, Father Gander Nursery Rhymes: The Equal Rhymes Amendment, named on seven “Best of” Lists for both the 20th and 21st centuries; which also yielded his musical plays, Ganderland and O Christmas Three! Author of the university Speech textbook From the Heartland, he also composed and recorded over 200 songs and four record albums. His poetry appeared in international literary journals, on Broadway and the Kennedy Center, at the International Special Olympics, and was etched in stone at the Louisiana Department of Education.

Erstwhile cabinet-level Director of Cultural Affairs, Speechwriter, Senior Policy Advisor for Human Rights, Environmental Affairs, Agriculture and the Arts and Liaison to Iowa’s GLBTQ, Asian-Pacific Islander, Black, Latino and First Nations populations and the Women’s Commission for Iowa Governor Tom Vilsack; Executive Director of the Iowa Arts Council and Very Special Arts Iowa; before he passed away unexpectedly on August 27, 2021, Doug lived in Iowa City, a UNESCO City of Literature, on Willowbrooke Lane with Mei li; with his daughter Elisa, and the rest of the family nearby, including grandchildren Emma, Logan, and Lucius, as well as Gwyn, Hanqi, and his extended nuclear family.

Final Design for Arvid Osterberg’s Book ‘We All Fall Down’